10 most beautiful places for travelling

Picturesque places of our planet created by nature and man

There are many amazing and interesting places on Earth, among which you can choose a fabulous place for travelling. Stunning and breathtaking natural wonders, mysterious human creations, paradise islands with picturesque landscapes - everyone can find an impressive place on our planet.

At the stage of planning a trip, many tourists wonder whether it is safe to fly by plane during the coronavirus pandemic. Airlines and airports have adjusted to the current situation and took all necessary measures to protect passengers during flights. Therefore, if you adhere to the general rules of safety and hygiene in public places (wear a mask correctly, apply antiseptic to the hands), the risk of infection is low.

Visiting all the wonderful places on our planet can take a lifetime, that's why in this article we have prepared a list of the top 10 beautiful places for tourism. 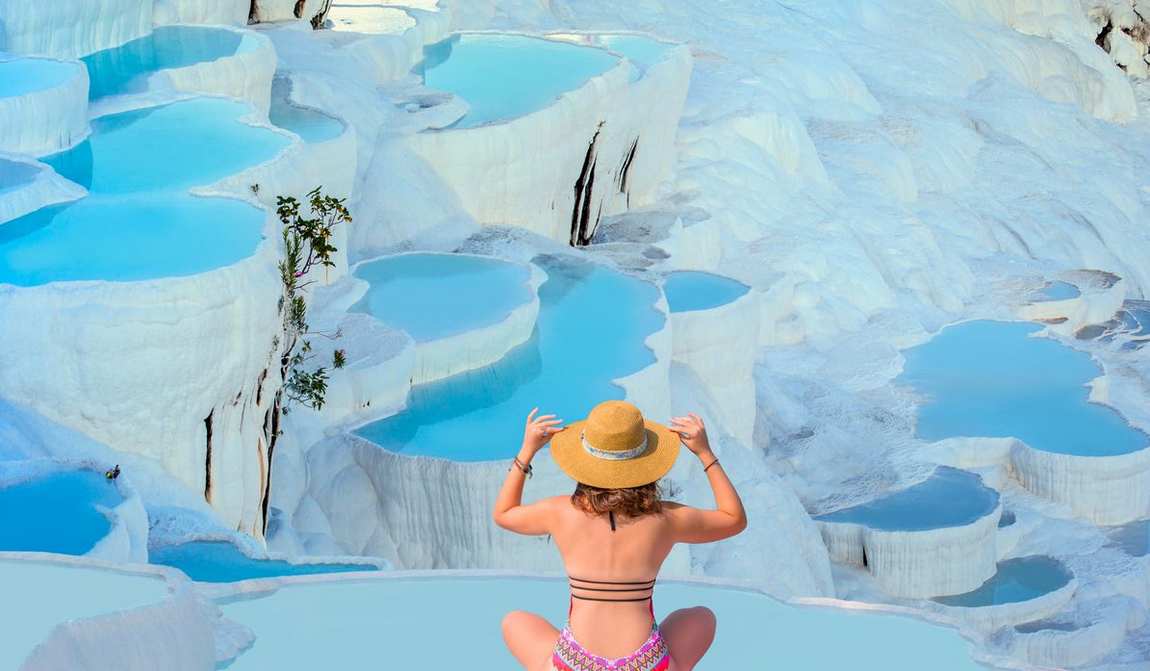 Pamukkale is absolutely deservedly considered one of the most fabulous places on our planet. Here, in the south-west of Turkey, there are turquoise  thermal springs, which during their existence have carved "steps" on the snow-white limestone slopes. Thus, natural travertine pools and terraces were created. They look  like amazing "cotton castles".

Among the warm thermal springs there is also a deep font - Cleopatra's pool. According to legend, the Egyptian queen rejuvenated in these sparkling waters. And this is not surprising because here the water is saturated with radon and minerals. Therefore, in addition to pleasant sensations, it also has healing properties.

At the resort of Pamukkale, tourists will be able to:

2. Santorini - “The ancient island of romance and relaxation” - Greece 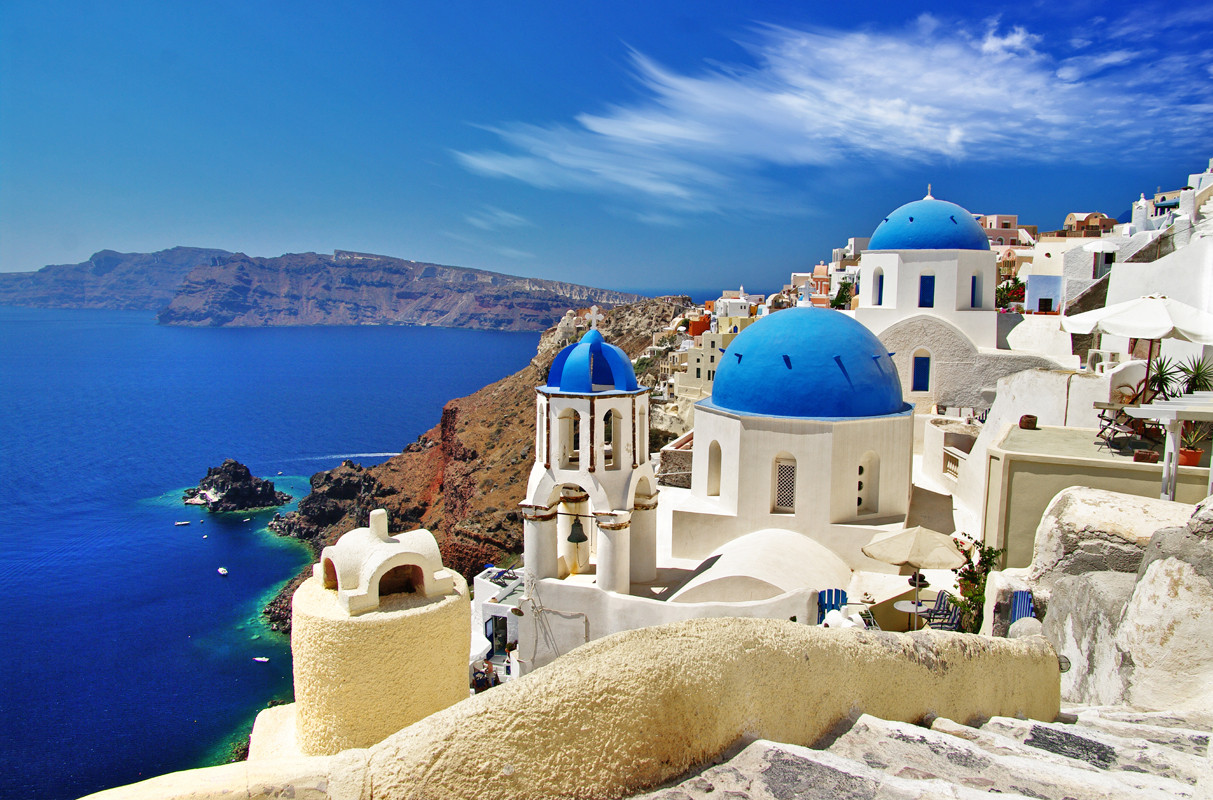 Greece is undeniably one of the most beautiful tourist destinations on our planet. The island of Santorini is located in the Aegean Sea in the south of the Cyclades. It has a magical beauty and atmosphere. The island is more than 3500 years old. Traces of ancient civilizations at every step remind of its rich history, steeped in myths and legends. Clear sea waters, clean beaches with colorful sand, volcanic landscapes and white houses with cozy facades make you feel the time has stopped.

Tourists visit Santorini to admire the picturesque landscapes, plunge into the atmosphere of relaxation, restore inner harmony lost in the world of rush and bustle. Historical museums, ancient temples and excavations will not leave connoisseurs of archeology unimpressed. Fans of outdoor activities will delight the fabulous underwater world in the coastal waters while diving. 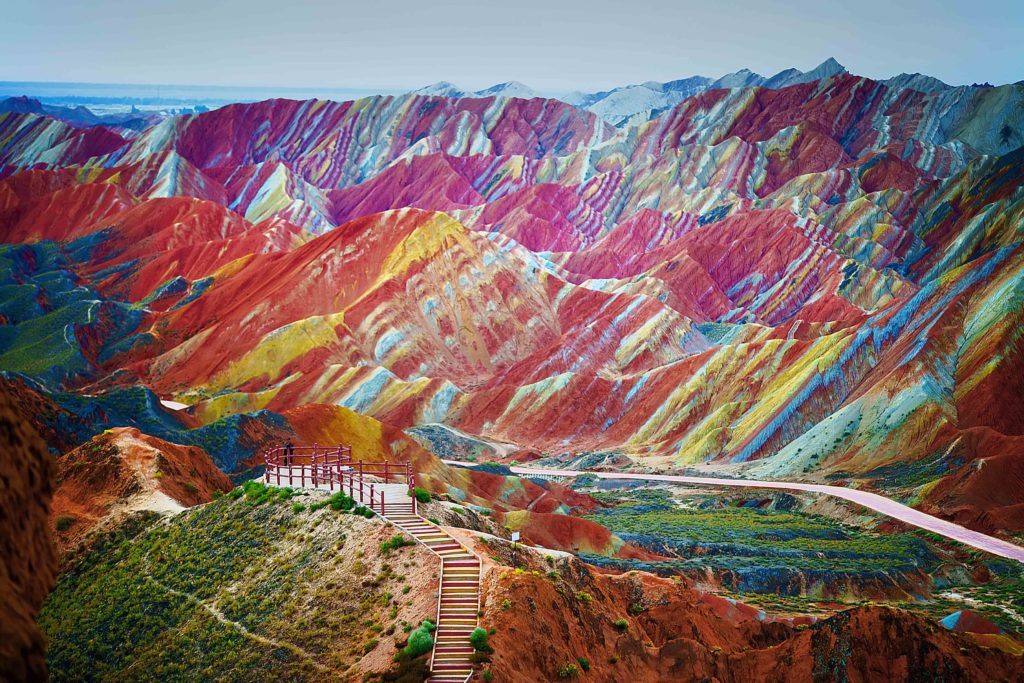 The colored rocks of Zhangye Danxia in the Geological Park of China's Gansu Province are a unique type of geomorphology. These colorful mountains were formed from multi-colored sandstone and conglomerates of the Cretaceous period. Hundreds of millions of years ago there was a natural pool, which eventually dried up. Its sediment oxidized and took on a multi-colored color.

Tourists from all over the world come here not only to enjoy the unusual mountain landscapes, but also to ride a boat along the river and take a look at the ancient Buddhist temples. 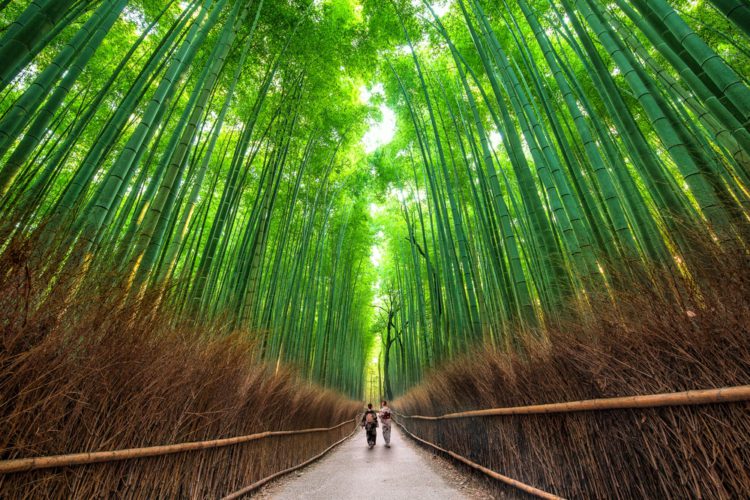 In the western part of the Japanese city of Kyoto, in the Arashiyama Park, there is a bamboo forest that stretches for 16 square kilometers. The park alley is fenced with dry bamboo stalks.
The grove will delight you not only with its  breathtaking view but also with the unique sounds that arise between the thin stalks of bamboo when the wind blows. This melody sounds mesmerizing. In the evening, the alley is illuminated by hundreds of small lanterns and looks like a fairy forest. The bamboo grove is a favorite vacation spot for locals and tourists from all over the world. 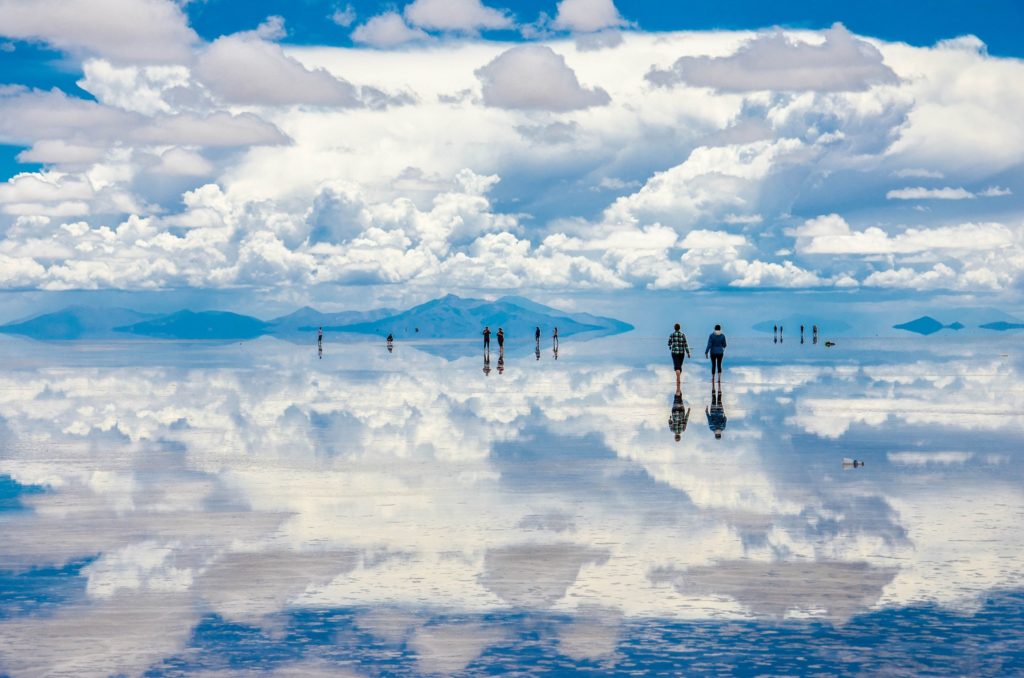 Salar de Uyuni - the Uyuni salt desert is one of the most unusual places on our planet. This natural creation is a dried-up lake - the largest salt marsh in the world with an area of ​​10,500 square kilometers. It was formed on the site of the Salt Lake that existed before our era. The Salt Lake dried up over time, exposing a layer of salt 2-8 m thick.

In the rainy season (February), a real miracle occurs: the salt layer is covered with water and the Uyuni salt marsh turns into a giant mirror surface that reflects the sky. It seems like the earth merges with the heavens. 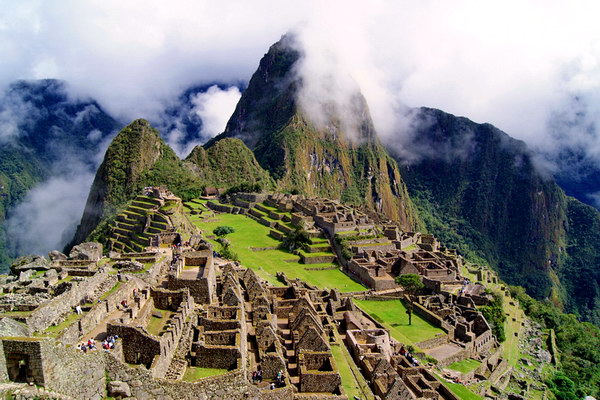 Freedom-loving Incas did not want to obey the Spanish conquistadors. Thus they hid in Machu Picchu. The mysterious city-fortress consists of hundreds of structures arranged in a clearly structured order. Machu Picchu is hidden in high mountain cliffs and shrouded in clouds. From below it is not visible at all. For more than three hundred years, it was considered a "lost city", because no one even suspected of its existence.

The inaccessibility and mystery of Machu Picchu attracts thousands of tourists from all over the world every year. In 2007 it was awarded the title of “New Wonder of the World”.

7. Antelope Canyon - “The place where water runs through the rocks” - Arizona, USA 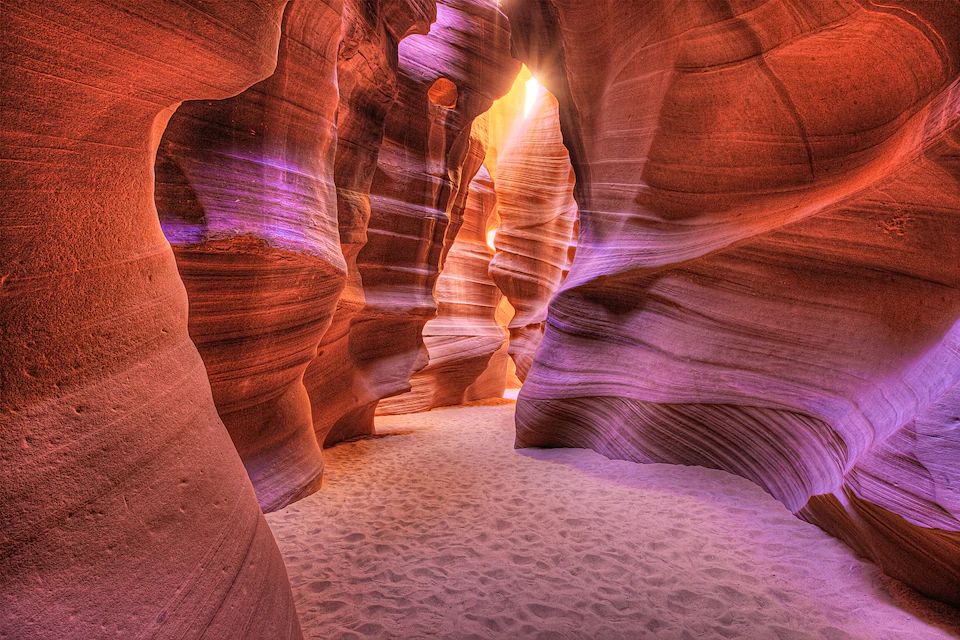 This amazing masterpiece is located in the southwestern part of the United States and belongs to the Navajo Indian tribe. The bizarre curves of the sandstone create the impression that you are on another planet.

The canyon got its name due to the reddish-red color of the walls, which resembles the noble fur of an antelope. A magical and mysterious atmosphere reigns within this fantastic creation of nature.

8. Niagara Falls - "Water thunder" - the border of the US state of New York and the Canadian province of Ontario 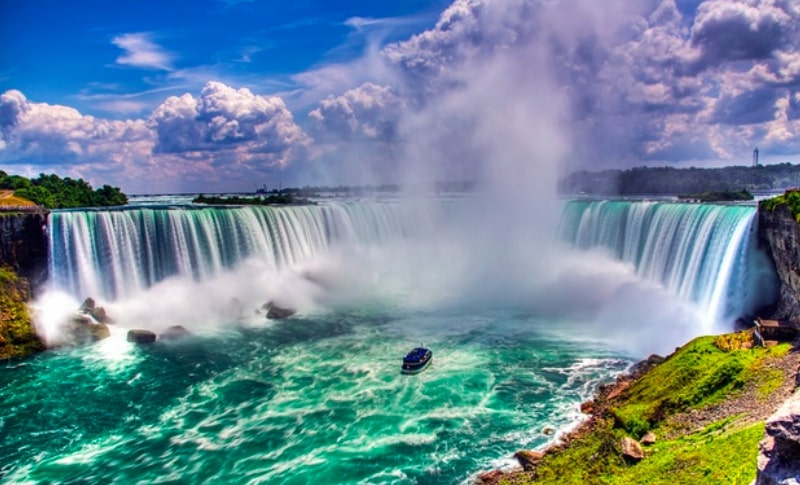 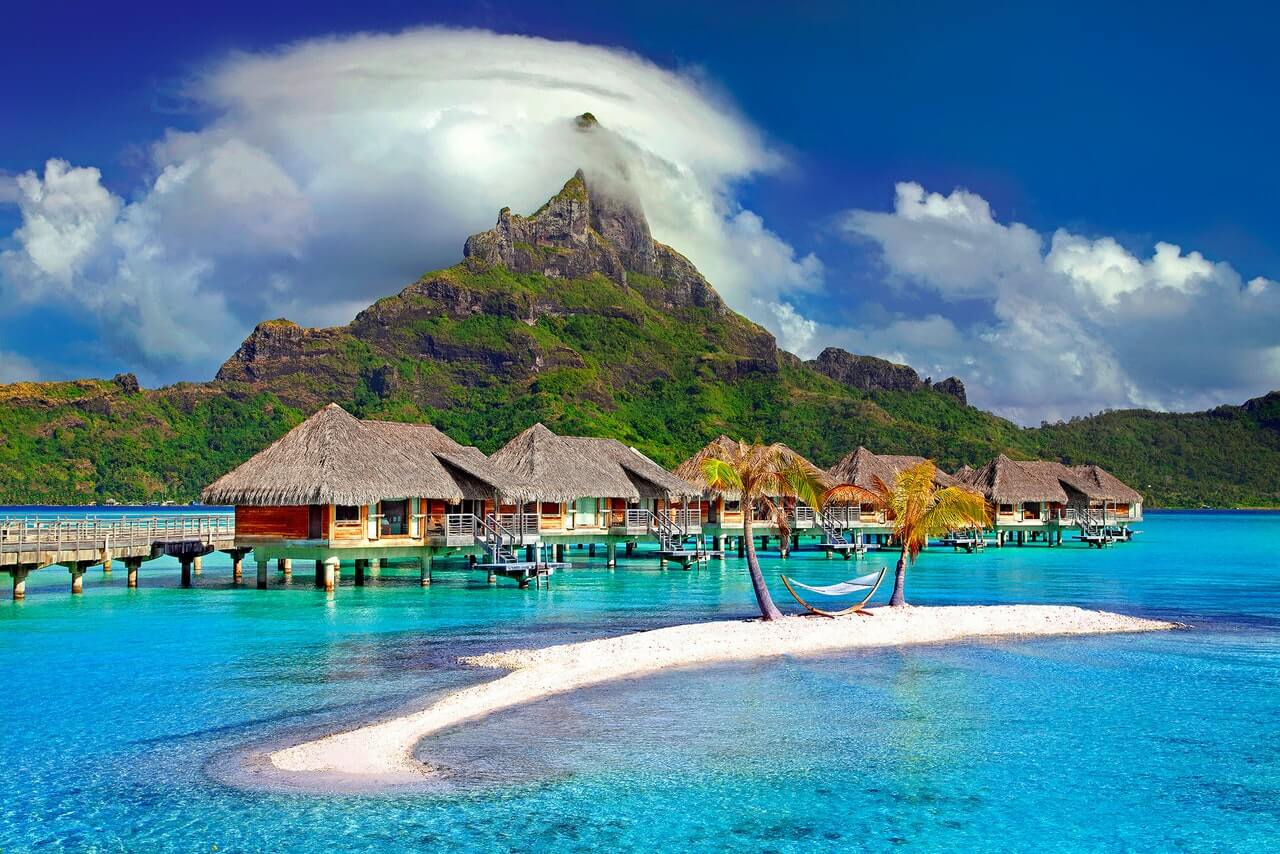 Bora Bora is a paradise island in the Pacific Ocean. This place is famous for its turquoise lagoons, soft white sand and enchanting tangerine sunsets. Bora Bora is only 9 kilometers long and its width is only 4,5 km. An atmosphere of romance and comfort reigns here.This island is a favorite place for couples in love from all over the world. This is not surprising because its nature is incredibly beautiful: bizarre tropical flowers, colorful birds, sea turtles, huge stingrays and sharks, with which you can even swim.

Things to do on the island: 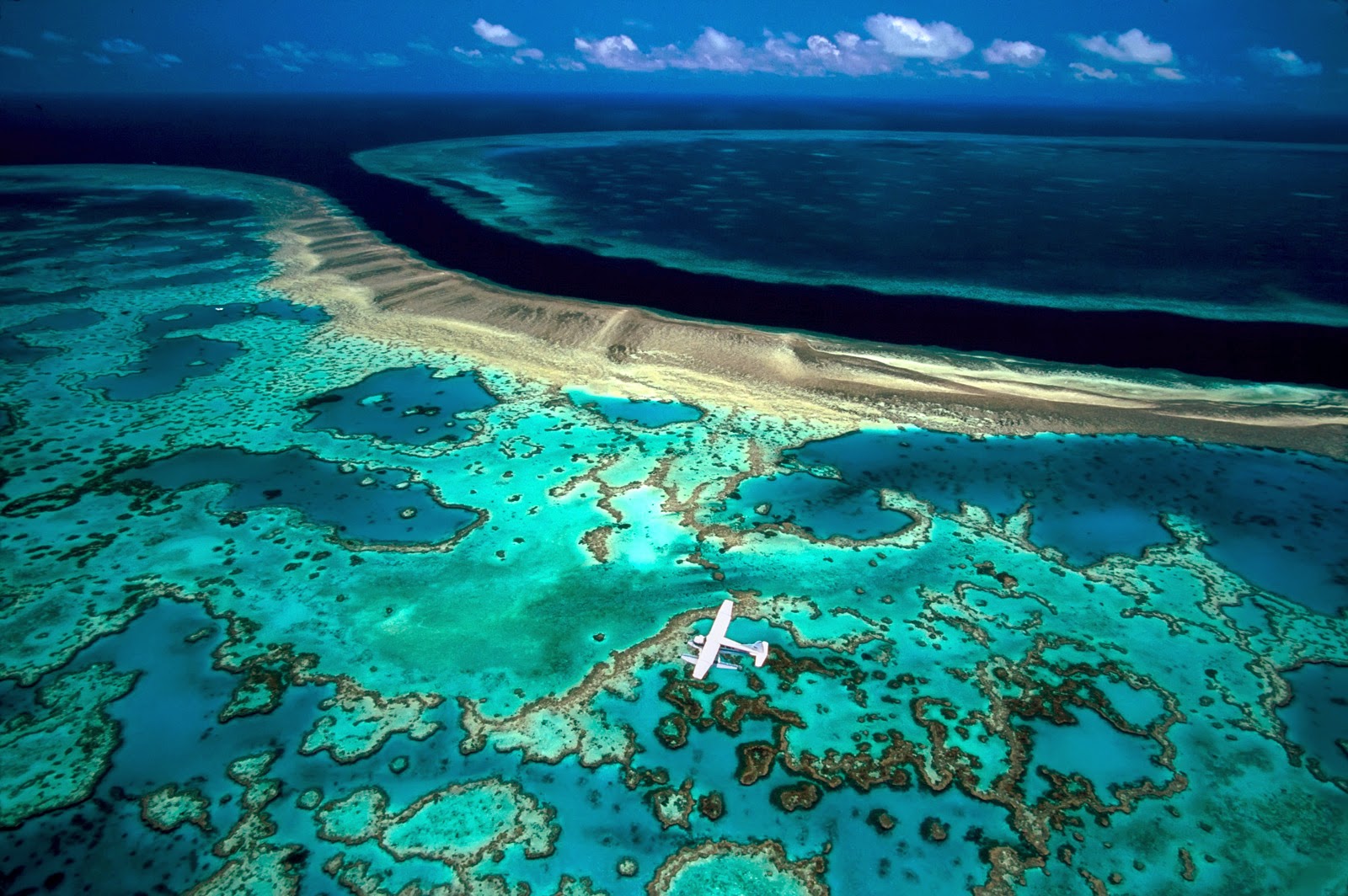 The Great Barrier Reef is the largest coral reef system in the world. It is located in Pacific Ocean near the northeastern border of the mainland. The coral ecosystem consists of about 3,000 individual reefs and 900 islands, stretching over an area of ​​345,000 square kilometers.

The Great Barrier Reef is so huge that it can be seen even from space. It stands out for its bright unique color. The most part of the reef is hidden under water and is visible only during low tide. You can admire the view from the air or by sailing on a boat, as well as while diving. The waters of the reef are crystal clear and reveal their entire underwater world, which surprises with the richness of its fauna and unusual landscapes. The Coral Sea is an ideal place not only for diving, but also for surfers.

In the underwater world of the Great Barrier Reef, corals account only 10% of the ecosystem.Coral Sea is a home of many anemones, sponges, sea stars, sea urchins, crabs and crayfish. Turtles come to the coral islands at night. The main decorations of the Great Barrier Reef are sea fishes. There are about 1500 species of them. A main pest of the Coral Reef is a starfish, with which the Australian government is now actively fighting. One starfish is capable of destroying all life on an area of ​​6 sq.m. in a year.

This is the end of our rating, but all the wonderful places in the world could be listed further and further. Each chosen destination will bring an unforgettable experience and impressive moments.

The most beautiful travel destinations are waiting for their tourists!