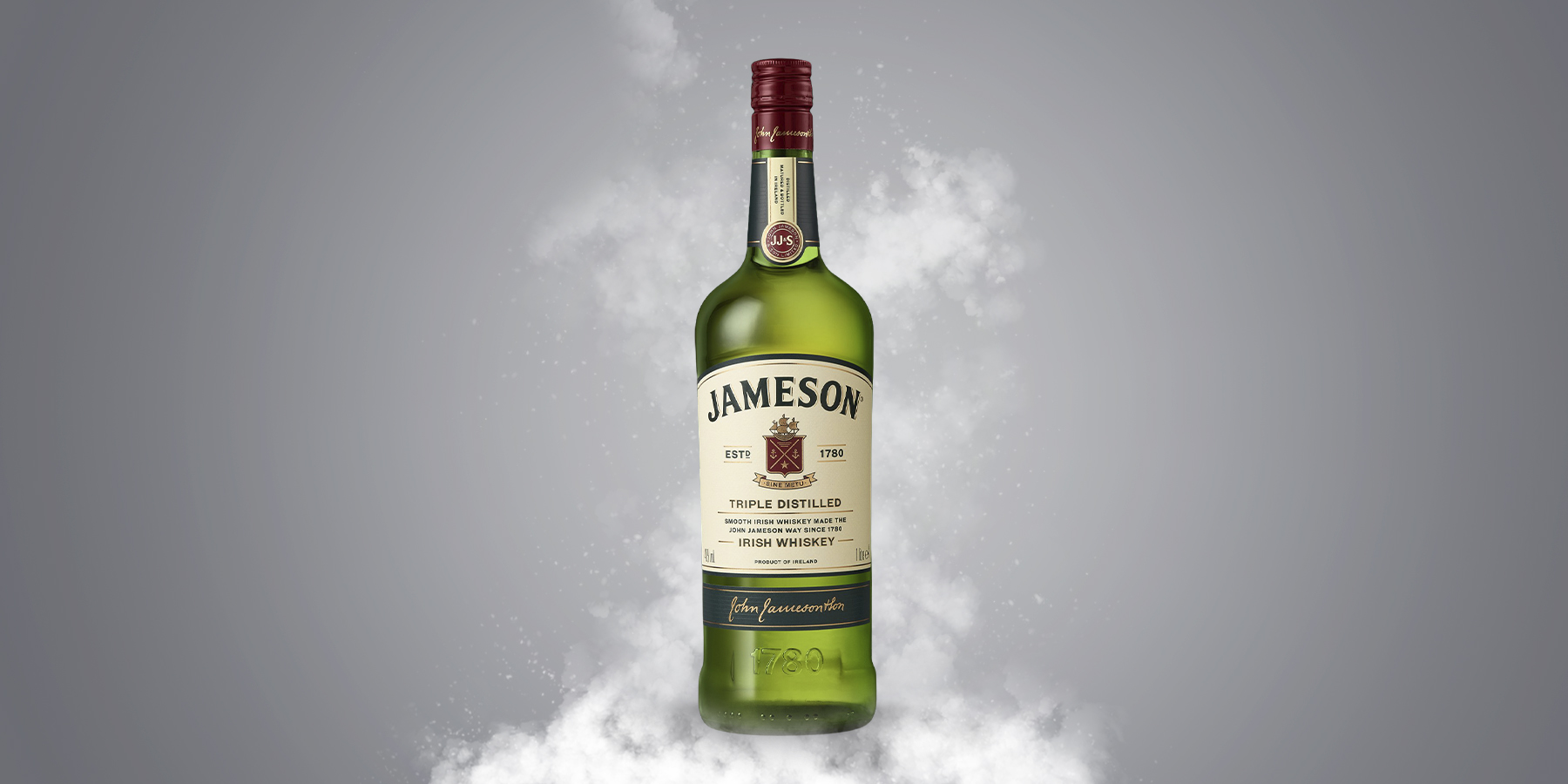 In Ireland, the second name of Jameson is “alive water”

Jameson is the benchmark of the classic Irish blended whiskey that has been the embodiment of individual and innovative production technologies for over 200 years. For two centuries, the enterprise from a small plant with a single distillation still has grown into a large-scale production, which now is a part of the French holding "Pernod Ricard". Today, Jameson has worldwide sales of 8 million boxes per year.

The production of this legendary drink takes place in the south of Ireland, in County Cork, near the city of Middleton. Thanks to its soft rich taste and clean aroma without smoky notes, it has earned worldwide popularity.

This article is about the tasting characteristics of this noble drink and many interesting facts from its life.

In the 18th century, when Jameson was launched, Ireland was experiencing accelerated economic development. In 1780, an entrepreneur John Jameson decided to produce Irish whiskey and chose the motto for his business “Sine Metu” (Latin) - “Without fear”. Soon, Jamison's business went uphill and he became the owner of the famous distillery on Bow Street in Dublin.

The company began to develop rapidly and gain production momentum. At the same time, it improved the quality of products too. John's youngest son became his partner. Since then, the company has been called John Jameson & Son. During the period of their joint leadership, they became the leader of the supply of whiskey to England. 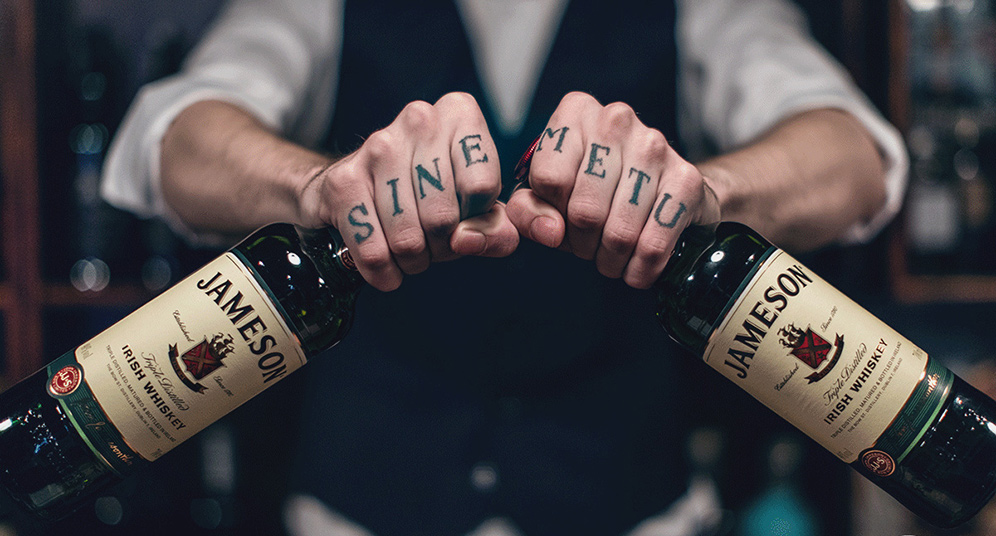 “Sine Metu” (lat.) - “Without fear” - the generic motto of Jameson which is written on each bottle

The company’s main strategy was to keep the traditional recipe, but at the same time introduce the latest innovative technologies into the production process. During the alcohol boom in England, the largest distillation still was installed at the distillery.

In 1887, the territory of the distillery grew to 5 acres. All divisions necessary for production were located in one building. The distillery became a town with all the necessary service facilities: a sawmill, workshops for coopers and carpenters, a forge, a construction shop that erected new buildings, etc. Thus, the company gave the people of Dublin thousands of jobs.

The end of the 19th century was difficult for Ireland: the post-war period, the civil war in the country, "dry law" in the United States. Jameson experienced the crisis for the first time and began to incur losses. Despite the modernization of the distillery, the company could not survive the competition with new Scottish producers.

In 1966, to preserve Irish whiskey as a brand, it was decided to merge three large concerns of alcohol production into one large company Irish Distillers Ltd. In 1988 they merged with the French group Pernod Ricard. The main productive forces moved to the south of Ireland to County Cork. Thus, the Jameson distillery was given a second life. 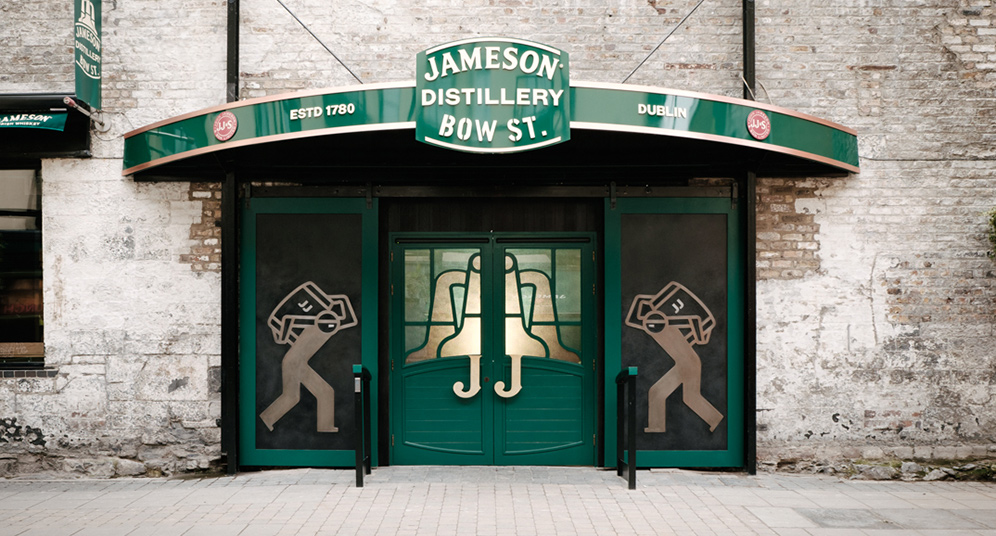 Jameson has three main ingredients: barley, corn and Irish spring water. Barley grows in fields around Middleton. Spring water is taken from the Dangorni River, which flows directly through the territory of the distillery. This is very symbolic, because the word "whiskey" comes from the Irish "uisce beatha", which translates as "alive water". But corn is a sun-loving crop, so Ireland is not suitable for growing it. What`s why its deliveries are carried out from the fields of the south of France.

Barley and corn are fermented and triple distilled separately. Thus the alcohols 80-80.5% and 94.4% respectively are formed. The corn gives a rich and sophisticated flavor at the same time. And thanks to the method of drying malt in closed ovens, the whiskey retains its delicate floral aroma without being saturated with smoky notes.

After distillation, the master blender mixes these spirits and lowers the degree to 60-70% using spring water. After this the drink is aged in special bourbon and fortified wine barrels brought from the USA and Spain. When aged in these barrels, the Irish drink inherits the aromas of vanilla, sweet sherry and woody bitterness. 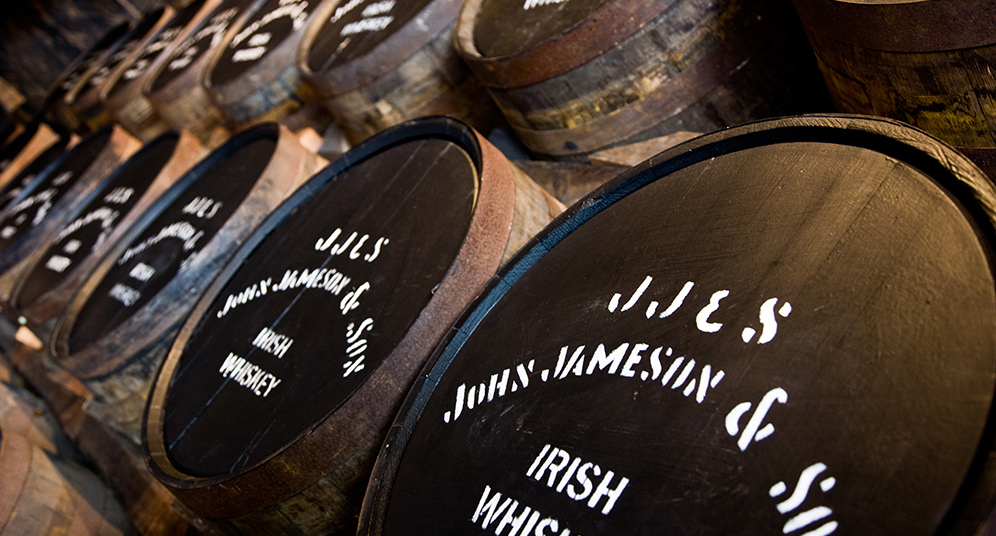 The barrels have been stored for several years in a dark cellar in Middleton. There is a rule: to be called Irish whiskey, the drink must be aged on the island of Ireland for at least 3 years. Jameson in barrels in the process of evaporation loses about 2% of alcohol annually. This part is called the “part of the angels”. The mature whiskey is blended in a large vat before bottling.

Whether the whiskey needs further dilution depends on what degree Jameson is obtained at the output. Whiskey 40% ABV is ready to drink.

The tasting is recommended in 5 steps:

As a result of triple distillation and long aging in oak barrels, Jameson acquires a golden color. The saturation of the shade directly depends on the aging time of the drink and on the type of sherry that was in the barrel before the Irish whiskey.

Depending on the aging, Jameson reveals itself in all sorts of shades and bouquets, which are based on woody oak motifs with notes of sherry. Additional accords are sweet fruit hints (bananas, melons, plums). In addition, the aroma contains characteristic notes of spices, honey, iris and licorice. 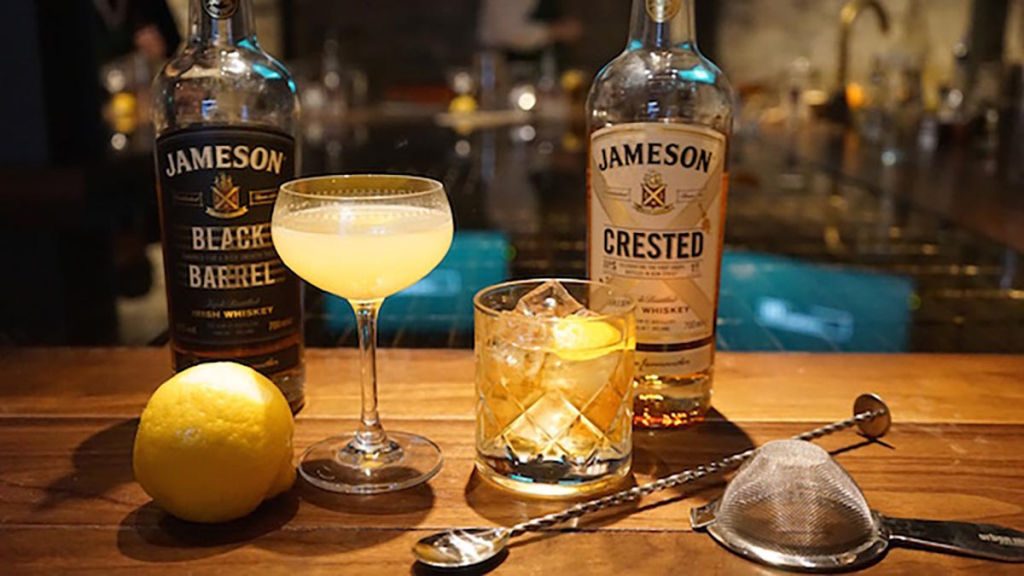 Taste characteristics depend on the blend and the aging period of the drink in barrels. But the hallmark is softness and lack of pronounced alcoholism. Whiskey aged 5-8 years is characterized by a light taste with warm notes of vanilla, honey, dried fruit and a nutty aftertaste. The longer the aging of the drink, the stronger and richer its taste. The whiskey with more than 10 years of aging has a tart, complex taste with distinct notes of sherry and spices.

✔ dark chocolate without fillers and additives 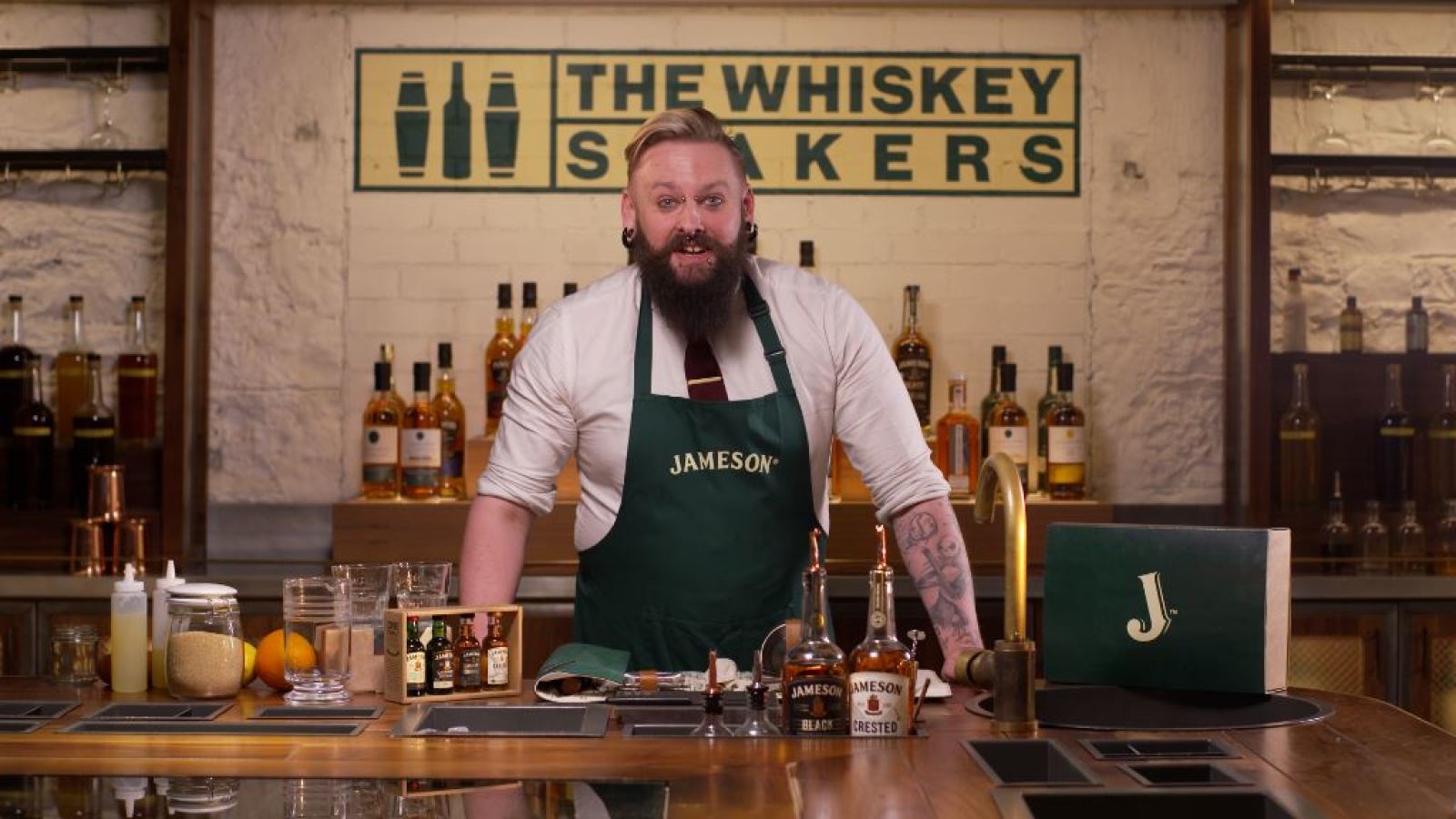 Despite the fact that today Irish whiskey has worthy competitors, with its excellent quality and noble soft taste, nothing can match. What event in your life is worth opening a bottle of Jameson?

Today you can buy Jameson in many alcoholic beverage stores. But do not forget that due to the high popularity of the brand, there is also a high risk of acquiring a fake. To protect yourself, buy elite alcohol only from trusted distributors.

Duty Free shops work directly with brand representatives, so only original products are sold here. When you travel, don't miss the opportunity to pamper yourself with nice souvenirs. Make a pre-order on the site or mobile application MyDutyFree and get a 7% discount. You can pick up your order without queuing at the store checkout after passing through passport control.

Enjoy your travel and shopping with MyDutyFree!